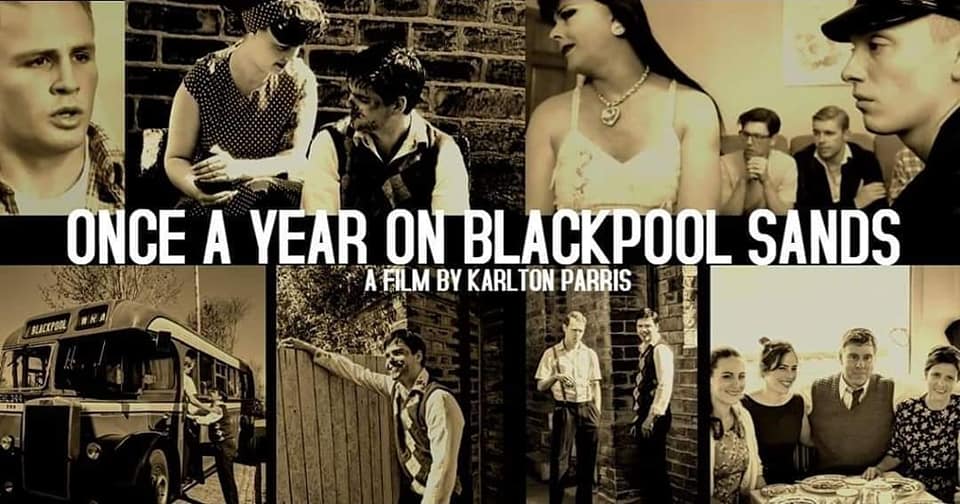 ‘Once A Year On Blackpool Sands’, 2020, (OAYOBS) is a beautiful portrayal of the relationship between Tommy and Eddy (played by Macauley Cooper and Kyle Brookes, respectively). Based on a true story, OAYOBS follows the hardships that were faced by the couple in the 1950’s. At this time being gay was illegal and homosexuality could, in some cases, carry a sentence of life imprisonment.
It’s quite hard to believe that just being yourself and loving who you love could be against the law, this is still the case in many countries and actually carries much harsher sentences, death being one of them.

June is Pride Month, a time to come together in solidarity with the LGBTQ+ community and show your support and be recognised as believing that ‘love is love’.
I therefore thought this would be a good time to tell you all about ‘Once A Year On Blackpool Sands’, my small involvement in the film and why you should definitely seek out this incredible work of art.

Adapted from a play by Karlton Parris (Babydog Films), ‘Once A Year On Blackpool Sands’ evolved after Karlton received letters from the LGBTQ+ community which told of their stories, their lives, their experiences, how they’ve been treated; the lifestyle and relationships that they’ve had to hide.
OAYOBS is the debut feature film from Babydog Films and has already captivated audiences in New York and here in the UK. It was very well received in NYC at its first intimate screening and the debut screening here in the UK was attended by almost the entire cast, crew, their friends and family.
I mentioned my, rather fleeting, involvement in this production, I am credited as ‘Spitting Woman‘… a role I am equally proud and disturbed by. Yes, I was an “extra” in the film and clearly my split second appearance is not much in comparison to the exquisite performances from the lead cast. However, my small part in this story is obviously a piece of a bigger picture. The bigger picture that involves Tommy and Eddy, and every other gay man and member of the LGBTQ+ community that has come before and after them that have been ridiculed, attacked, belittled, imprisoned, tortured or even killed.
It brings all of this together, to tell the story of everyone ever targeted purely because they appear to be “different” or “queer” or because they love someone who is the same sex as them, because they like to dress in clothing that is “meant” for the opposite sex, because they were born in the wrong physical form, because they love a person regardless of sex or gender. And it does that with tenderness and passion.

I don’t know if I’ve just been looking in the wrong places but I’ve never seen a gay relationship portrayed in this way before. It’s either always about sex for them or the gay men are always over the top camp or are there for comedic value (Ugly Betty, Will and Grace, Desperate Housewives, SATC, He’s just not that into you, Mean Girls) They seem to be shown in a way that suggests they can’t have loving, committed relationships and this is obviously not true!
Gay men still have the same feelings towards relationships, commitment, famlies and life as everyone else. They might want to get married and have kids, or they might want to be single, they might want to buy a house and live with their partner or they might want to live in a houseboat and eat cheese all day… My point here is that being gay doesn’t mean you’re not capable of having a “regular life”. Their lives are no different to a straight persons life (other than the horrific hatred and discrimination they often face).
They have relationships, marriages, divorces, children, grand-children, they are uncles, brothers, cousins, Dads etc…!
They’re not all sex mad and they’re not all camp, some of them probably aren’t even that funny neither…
It was beautifully refreshing to see this relationship illustrated with such tenderness and care. There was clearly huge elements of compassion poured into making this as special as it is and Karlton, who directed the piece, must be immensely proud of Kyle and Macauley and the way they delivered their performances with such respect and consideration.
The emotions that emanated from the screen were certainly unrivalled with any LGBTQ+ relationship I’ve ever seen on screen, again maybe I’ve not been looking hard enough, and please point me towards any others you know of. But I urge you to seek out this piece of cinematic brilliance! And not just for the reasons I’ve mentioned above, yes, it’s paving the way for more conversations to be had and it’s fantastic to see the inclusivity of more people from the LGBTQ+ community, but also because it’s an excellent piece of storytelling, it has amazing comedic timings and it’s Northern!

Babydog Films are currently on with filming their second feature film, Beautiful Monster, which is based on the life of Mary Shelley. This one is a dark and haunting tale full of the twisted macabre, with a deeply disturbing insight into the troubled mind of Mary Shelley.
With many other projects cooking in the pot, Karlton is definitely someone to keep an eye on!

“I hate the word homophobia. It’s not a phobia. You’re not scared. You’re an ass-hole.” – Morgan Freeman